Jonathan Finkelstein, CEO of Credly, founder of LearningTimes and director of the BadgeOS Project, recently spoke to Dr. Martha J. Kanter, Under Secretary of Education at the U.S. Department of Education. 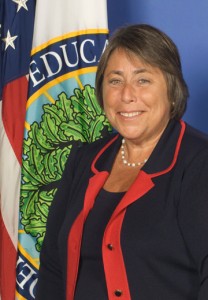 The discussion turned towards digital badges and the role they can play in education and workforce development. Finkelstein asked Kanter to think ahead five or ten years to paint a picture of what the learning and working landscape would look like if individuals were to commonly earn and use badges to pick up and showcase knowledge and skills. Kanter offered an animated response, and made one of the best cases to date by a policy maker (or by anyone, for that matter) for the potential of microcredentials. She also connected the value of badges to President Obama's goal of every American having at least one year of postsecondary education or training.

The conversation aired as part of the Innovators Spotlight, an online event event recognizing the achievements of the League for Innovation in the Community College award winners.

Here is an excerpt:

About Martha J. Kanter, Ph.D. Martha J. Kanter was nominated by President Barack Obama on April 29, 2009 to be the under secretary of education and was confirmed by the Senate on June 19, 2009. Kanter reports to Secretary of Education Arne Duncan and oversees policies, programs, and activities related to postsecondary education, adult and career-technical education, federal student aid, and five White House Initiatives on Asian Americans and Pacific Islanders, Educational Excellence for Hispanics, Historically Black Colleges and Universities, Tribal Colleges and Universities, and Faith-Based and Neighborhood Partnerships. To spur education, economic growth and social prosperity, Kanter is charged with planning and policy responsibilities to implement President Obama's goal for the U.S. to have "the best educated, most competitive workforce in the world by 2020" as measured by the proportion of college graduates over the next decade. Under Secretary Kanter and her team are keenly focused on improving college access, affordability, quality, and completion to implement President Obama's American Graduation Initiative.

Is your organization ready for digital credentials?